This site really does not work in Netscape 4.x any more: please get a new browser!

Fine Arts Brass Ensemble is the longest-lived, the most innovative, the most widely travelled and the most highly acclaimed British Brass Ensemble. FAB has given over 3000 concerts since its inception in 1980, and has played in more than 60 countries, often representing the British Council.

Click a player to go to his or her page... 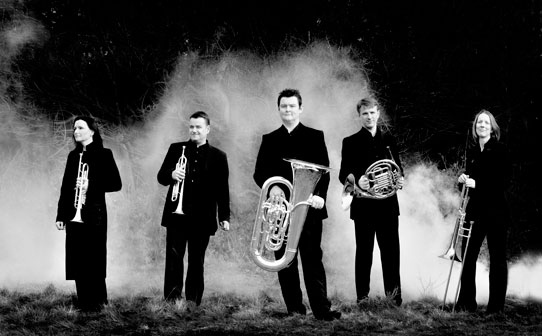 Get FAB in hi-res!

FAB has appeared at nearly every British Music Festival, and many more worldwide. We have commissioned over 100 new works from a variety of contemporary composers. This initiative continues with a major new work to be composed for us in 2014 by James MacMillan.

FAB's variety is emphasised by its performances for the BBC. It has given its own series of light entertainment shows on Radios 2 and 4 and broadcasts regularly for Radio 3. In addition we can be seen regularly on BBC 1 via the long running Sunday evening show Songs of Praise. This diversity of styles has led to performances in unusual venues, such as Under the Mango Tree at the Bagamoyo Festival, Tanzania; Zanzibar Spice Market; Bangladeshi Customs and Dar Es Salaam Bus Station. FAB has given masterclasses, school concerts, and demonstrations across the world, from Namibia to Cheltenham, Hong Kong to Neehan, Wisconsin.

Press the valve to hear an MP3 of Fine Arts playing The Flight of the Bumblebee from BBC Radio 3's Live at Brandon Hill Bristol series.

FAB has made over 30 recordings for various companies, many of which have been for Nimbus Records. Our latest CD is due for release in the Autumn of 2010 on the Doyen label and features FAB as soloists with Brass Band featuring founder Fine Arts Brass member Stephen Roberts's 2008 composition, Malvern Chase Suite.

FAB receives financial support from the PRS Foundation and is pleased to be associated with Smith-Watkins trumpets and Nimbus Records.